Will the phone ring in the morning? That call is made well before sunrise 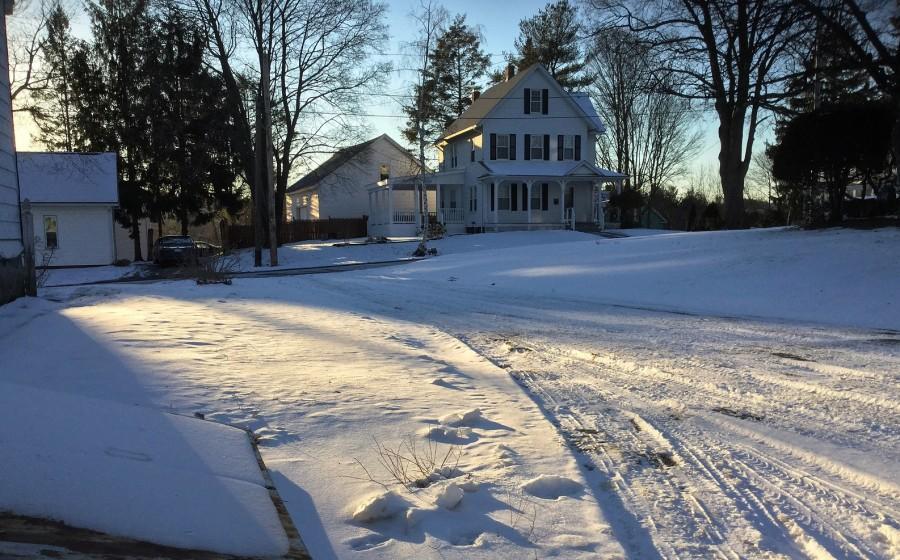 When inclement weather hits, a decision about keeping school open must be made by 5:30 a.m.

Get outside for the bus. Wait—say what?

So cold there’s a chance of frostbite? Three feet of snow?

These are the situations that students wait for, hoping for a school cancelation.

But how does AMSA make that decision when the weather in New England can be so famously unpredictable? How can administrators be sure that the decision they make is ideal for students, parents, and teachers?

On Jan. 8, AMSA was closed due to extremely cold weather. Back in December, though, it was open despite frozen rain and black ice. Sometimes it seems that, barring a Nor’easter that makes it easy, the call is a no-win situation.

Somebody is bound to be unhappy with whatever decision is made.

AMSA Vice Principal Rick Porter said he is not greatly involved in the decision making, but he does know how the process works.

“The executive director or school superintendent is always watching the weather for what could be a dangerous situation,” Mr. Porter said.

“First of all, I am learning about the uniqueness of the location,” she said, referring to the fact that AMSA students don’t just come from Marlborough, but from towns and cities separated by as much as 30 miles. “[But] distance alone [is] not a determining factor.”

Dr. DeMello said that there are many schools in the area that require students and teachers to travel long distances. She cited her experience at regional schools such as Dighton-Rehoboth, where students can travel from the “far corner of one town,” and “teachers do not always live in the community.”

But she noted that AMSA was different.

“Marlborough is at the crazy crossroads,” she said. “And when you watch the weather reports on TV, you will often hear them distinguish about things north of the Mass. Pike, which cuts across the center of the state, or east or west of [Interstate] 495.”

Dr. DeMello said she did feel that, with the benefit of hindsight, she could have made a better decision regarding the ice storm in December.

“The ice storm we had in December, I could have perhaps made a better call, but I’m from the south shore, and when I left my house, it was 47 degrees, and my whole ride in was not problematic at all.”

That’s what makes the call so difficult. Canceling school is a big decision and only a handful of “snow days” are built into the schedule. Go beyond that allotment and school gets extended in June.

Talk about a no-win situation.

Executive decisions of this type aren’t easy when you’re at the heart of the “495 corridor.”

“So you’re trying to make a call based on four quadrants: a southeastern, a southwestern, a northeastern, and a northwestern,” Dr. DeMello said. “Which can all have different things happening because of just this unique central location that Marlborough has at the crossroads.”

Dr. DeMello elaborated that regardless of what weather is predicted to hit, the consideration given to safety is paramount.

“Our students are so far spread out that when a bus travels to Framingham or to Worcester, students have to walk a distance in some instances to go to a common bus stop location,” Dr. DeMello said, clarifying that many students do not have door-to-door pick up.

“Students waiting for buses, how long are they waiting?” he postulated.

This is an even bigger problem when students don’t make the best decisions in terms of clothing.

“I have noticed students without coats [in very cold weather],” Mr. Porter said.

When it comes to making the final call, Dr. DeMello does not rely solely on weather reports. In fact, she communicates with other superintendents in order to figure out what is best for the school.

“The very cold weather day we had,” she said, “another school that is in a very similar situation to us in terms of being located here, but also taking kids from many regions is Assabet Valley. So I was communicating with the superintendent of Assabet Valley.”

But this is New England and, as Mark Twain once famously quipped, if you don’t like the weather just wait a few minutes. There is pressure not only to make the right call, but to make it early. That isn’t easy.

Dr. DeMello cannot make the call any later because bus drivers need to be notified, something she said “people don’t necessarily understand.”

It is not easy to call a delay or an early release, either, because Dr. DeMello has to take into account the safety of the students.

Will the students go home to an empty house during an early release? It’s another factor that might not be readily apparent.

Will the students fail to wear proper clothing when they stand outside because parents have already left for work and no one is there to ensure they are dressed properly?

These are just some of the factors that Dr. DeMello must consider as well.

“It is a lot of pressure because you want to make the right decision,” she said.

Mr. Porter seemed to know the feeling, despite not being in charge of making the call.

“Honestly, I have never wanted to [make the decision] because there is always the worry that you are wrong,” Mr. Porter said.

“The biggest fear is not [about] calling school,” Dr. DeMello said.

“The biggest fear is conducting it and the fear of that resulting in an accident.”