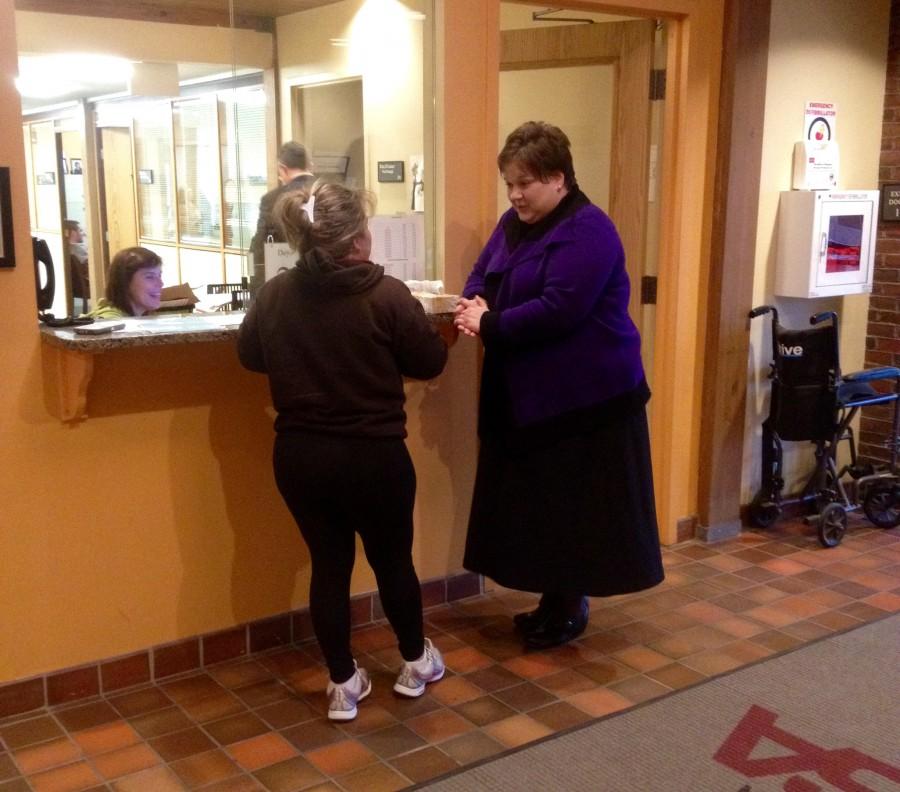 Picture this: A student walks into an administrator’s office expecting a brief conversation about an after-school club. Instead, the talk flows for 30 minutes and includes exchanges about recommendations in literature and the tenets of major religions.

This is the type of meeting one may expect to have with Erin O’Connor, AMSA’s new vice principal.

Whether it’s books, college, or even the Victorian era, Ms. O’Connor is well-equipped to speak about it.

“[Ms. O’Connor and I] were talking about school work and then we were covering subjects like college and favorite movies and books and time just flew by,” senior Becca Lozinsky said.

Yet, because Ms. O’Connor is an administrator, and a new one at that, she is often busy learning the ropes of a new school and tackling a never-ending pile of work. As vice principal, Ms. O’Connor is responsible for online forms, clubs, and making herself and school forms accessible to parents, among a host of other tasks.

This seems to have become a tradition at AMSA: welcoming new administrators each year who are rarely seen but who are always working hard for the school.

If and when she can free herself from the inner sanctum, students are in for a treat because Ms. O’Connor is quite the Renaissance woman.

“Before Ms. Hooker’s class, I didn’t really like reading—not for fun, at least,” Ms. O’Connor said. “But she seemed to know everything and she made literature come alive. I found myself wanting to read constantly.”

Nobody can know everything, but it’s hard to find a subject that Ms. O’Connor doesn’t know at least a little something about.

Ms. O’Connor was inspired by her teacher not only to read, but to attain degrees in English from Smith College and the University of Virginia, as well as pursue a career in teaching English and literature.

Inspired to teach, Ms. O’Connor taught 11th and 12th grade English at the Kirov Academy of Ballet and Preparatory School in Washington, D.C., where she also was the Dean of Faculty and Dean of Students.

Ms. O’Connor ably demonstrated her skills at AMSA when she taught a senior Gothic Literature class at the beginning of this school year, when the school was still searching for a permanent teacher.

“She was very energetic,” senior Sanket Panda said. “She told us to come to her if we needed any help with college applications, too.”

It is apparent that Ms. O’Connor enjoys literature and teaching, but perhaps even more apparent is her passion for guidance. She feels that guidance and mentorship is crucial and she served as Dean of Undergraduate Advising and First Year Programs at Smith College.

“One mentor can change someone’s world,” she said. “I know because Ms. Hooker changed mine.”

Because she values mentorship, Ms. O’Connor wants AMSA students to feel free to come to her with any help they may need. She is even willing to practice with juniors and seniors and do mock college interviews.

“There’s nothing more terrifying and exciting than figuring out where you want to go and what you want to do after high school,” Ms. O’Connor said.

In terms of adapting to a new environment, Ms. O’Connor recounted that she spent time teaching in Japan. (So, yes, if you begin talking to Ms. O’Connor and somehow struggle to find common ground, maybe sushi is the way to go.)

Ms. O’Connor spent three years in Kyoto, teaching English at Doshisha Girls’ Junior and Senior High School. She learned to speak Japanese the hard way: by immersing herself in the culture and language.

“I learned what it meant to fill in the ‘other’ circle because I didn’t look like anyone or even speak the language well at first,” she said.

As for AMSA specifically, Ms. O’Connor is very impressed with how kind and welcoming the students and faculty have been, as well as the openness and challenge of the school’s curriculum.

“The level of academic rigor is astonishing,” she said. “AMSA blows college away.”

Ms. O’Connor hopes to emerge from the shadows as the year goes on. After all, a meeting with the affable Renaissance woman will surely leave a student contemplating the conversation long after it is over.