The AMSA Voice • May 29, 2019 • https://newspaper.amsacs.org/bruins-on-the-cusp-of-making-sports-history/

Bruins on the cusp of making sports history 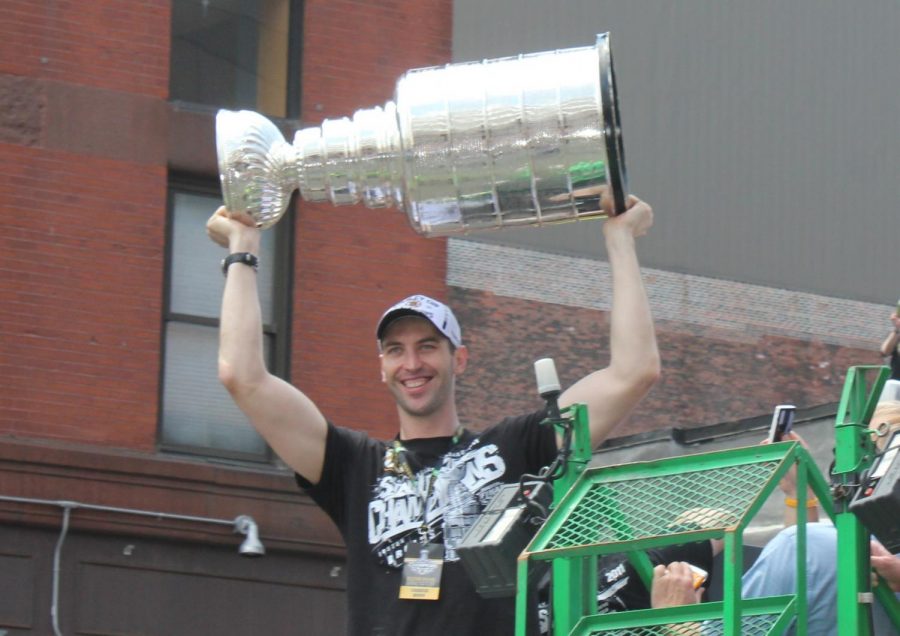 One thing that Boston is not short on is successful sports teams. The Patriots, Red Sox, Celtics, and Bruins have all won championships since 2008.

And now, with the Red Sox and Patriots both having won titles in the past eight months, the Bruins have a chance to give Boston something never before accomplished in the post-World War II era: championships in three of the four major sports in the same year.

Having already won Game 1 — by scoring four unanswered goals in a 4-2 win Monday — the Bruins can take a big lead in the Stanley Cup Playoff Finals tonight against the visiting St. Louis Blues.

Actor and Boston icon Denis Leary did a promotional video for NBC prior to Monday’s game, in which he jokingly said that the Bruins needed to end the city’s championship drought.

“We haven’t had a parade in four months,” Leary deadpanned.

After finishing second in the Atlantic Division during the regular season, the Bruins fought their way to the Stanley Cup Finals by playing their best hockey of the year, highlighted by a sweep of the Carolina Hurricanes in the conference finals.

The road became a little easier for both the Bruins and the Blues when the Calgary Flames and the Tampa Bay Lightning, the top-seeded teams in each conference, were knocked out by wild cards.

After defeating the Toronto Maple Leafs in the first round and the Columbus Blue Jackets in the second round, the Bruins rolled past the Hurricanes.

They key to the Bruins’ success begins in the net, with veteran goaltender Tuukka Rask. During the regular season, Rask recorded a save percentage of 0.912 and shared time with Jaroslav Halak.

Rask, perhaps benefiting from that occasional rest during a long campaign, has really stepped it up, with an outstanding 0.942 save percentage in the playoffs. Many times he has given the Bruins a fighting chance, including a shutout against the Hurricanes in Game 4 of that series.

Rask isn’t the only player who has raised his game. Charlie Coyle has become a prominent threat, leading his line, and the line of Jake DeBrusk, David Krejci, and David Backes has proven its worth.

Also, although they started off slow, the first line of Brad Marchand, Patrice Bergeron, and David Pastrnak has played up to its huge potential — the group scored all four goals in the final matchup against Carolina.

Credit also must go to head coach Bruce Cassidy, who came to Boston in 2017. He’s clearly doing something right.

“His technique and knowing when to push the right buttons has obviously worked pretty well for us,” forward Chris Wagner told The Boston Globe. “He’s hard on us when he has to be, but I think he also knows when to step back and leave it to someone like [Zdeno Chara] or [Bergeron] to say something in the room to get us going.”

Although Chara is showing signs of slowing down at age 42 — after 21 seasons — he is still a force and became the oldest defenseman in league history to score a playoff goal during the Toronto series.

The team has undeniable chemistry and, in interviews, the players will call each other nicknames and none take much credit for the team’s success. Marchand and Torey Krug even have an amusing Twitter feud going, in which fans have become involved.

Should the Bruins win tonight and go on to hoist the Stanley Cup, the success will deservedly be shared and all of New England will be amused — by another parade to end that four-month drought.