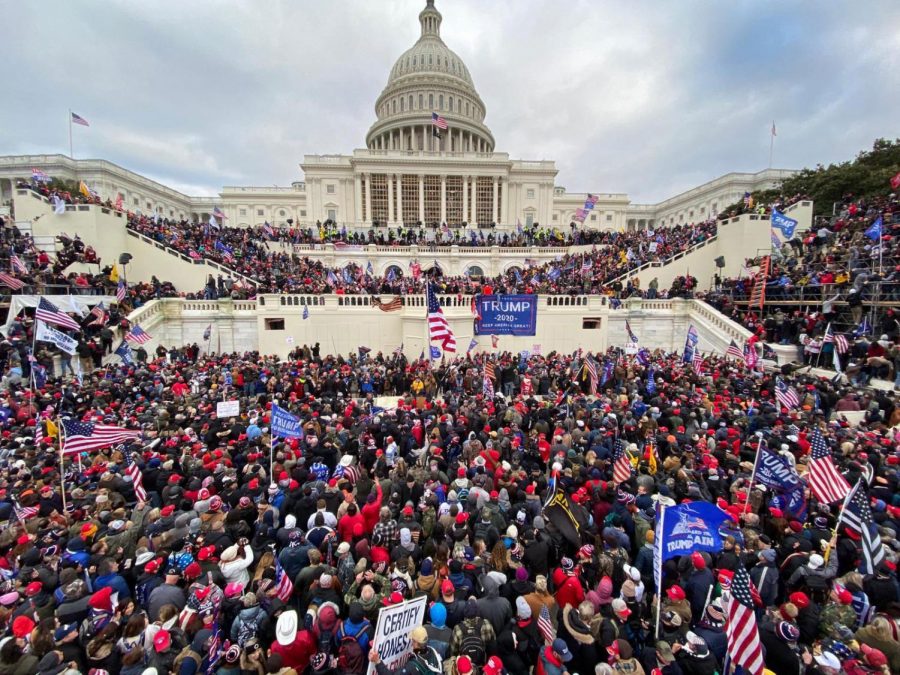 Rioters stormed the U.S. Capitol on Wednesday as members of Congress were ratifying Electoral College results.

President Donald J. Trump inspired a violent mob to attack the U.S. Capitol and our democracy on Wednesday in opposition to the confirmation of Joe Biden’s election as President. His actions are unacceptable and Mr. Trump cannot go without facing consequences. The staff of The AMSA Voice is calling for his impeachment.

Varying calls for impeachment or for Vice President Mike Pence to enact the 25th Amendment have been deemed necessary by various members of Congress, including House Speaker Nancy Pelosi and Senate Minority Leader Chuck Schumer, in the wake of Mr. Trump’s actions. If Mr. Pence were to enact the 25th Amendment, it would get Trump out of office for the last two weeks of his term, but not prevent him from holding public office in the future.

He must be kept out of our government for more than just the next two weeks. Impeachment and conviction would do just that, and bar Mr. Trump from ever running for public office again. As the harsher punishment of the two, impeachment must be invoked.

In either situation, Mr. Pence would take the place of Mr. Trump in the office of president. At the moment, it seems that the vice president is a more rational option for a leader. During the mob attack on the Capitol, Mr. Pence reportedly took the initiative to call in the National Guard when Mr. Trump reportedly declined to do so. After the mob was cleared from the Capitol, Mr. Pence confirmed the counting of the electoral votes affirming Mr. Biden and Kamala Harris as the winners of the Nov. 3 election.

But Mr. Pence should not be seen as the white knight of the day for simply being a rational man. He has broken ground zero. He is doing the bare minimum to protect our democracy from collapsing at the hands of Trump rioters. He has stood along with other members of Mr. Trump’s team and worked with the president to egg on supporters.

He stood to the side while Rudy Giuliani, Mr. Trump’s personal attorney, called for “trial by combat” earlier Wednesday morning. He stood to the side as Mr. Trump spoke to his supporters at the Ellipse and told them to march to the Capitol to make their voices heard. There is no hero in this story, only the opportunity to look forward and make the right decision for our country by impeaching Mr. Trump.

The actions of Jan. 6, 2021, prove that Mr. Trump will not give up on his narrative of a false election. These next two weeks will be crucial in stopping him and preserving our country. We must protect our democracy and eject him from office.

In a speech to his supporters before they moved to the Capitol, he inspired them, saying “We will never give up. We will never concede. It will never happen.” Mr. Trump’s deluded reality, in which he is the “true winner” of the election, must be taken from him, or he will never let go of it.

Our government must work to get Mr. Trump out of office in order to stop him from causing more pain to our country. He first harmed the nation’s health by mismanaging a response to the coronavirus pandemic, and he spent most of his campaign refusing to wear a mask, refusing to set an example. Now he has harmed the very democracy he swore an oath to protect.

In the wake of the riot by Mr. Trump’s supporters ambushing our Capitol, goaded on by Mr. Trump himself, we call for his impeachment and conviction — for the good of the country.