Trump and the echoes of Watergate 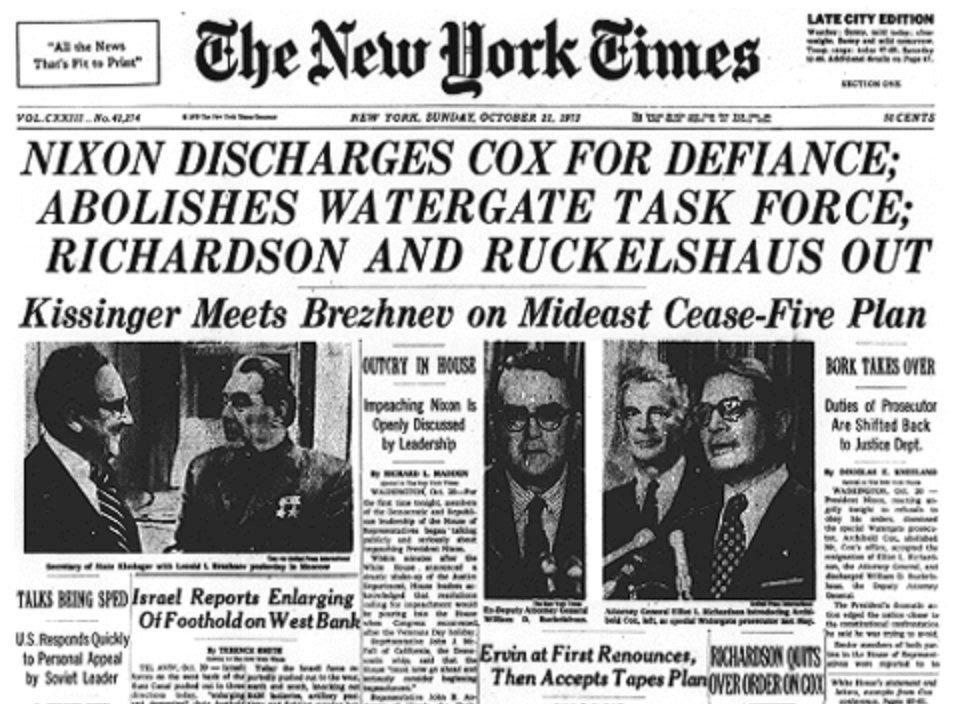 Courtesy of The New York Times

On May 9, President Donald Trump fired FBI Director James Comey, the man leading the investigation into possible connections between Mr. Trump’s campaign staff and Russia during the 2016 election.

The firing seemed awfully familiar for all those who remember October of 1973.

Mr. Trump’s White House staff initially stated that Mr. Comey was fired because of his “handling of the investigation into Hillary Clinton’s use of a private email server,” according to The New York Times.

But, two days later, Mr. Trump told NBC News anchor Lester Holt during an interview that he planned to fire Mr. Comey before Attorney General Jeff Sessions and Deputy Attorney General Rod Rosenstein recommended, in writing, that Mr. Comey be terminated for his supposed mishandling of the Clinton investigation. (It should be noted that Mr. Trump praised Mr. Comey’s handling of the situation during the campaign.)

Had Mr. Trump given solid and consistent reasoning for firing the FBI director, the fallout might not have turned into a growing scandal. His reasoning, however, was not logical and Mr. Trump has made it seem as if he fired Mr. Comey for simply being too aggressive with his investigation.

After months of praising Mr. Comey for his “guts” in tracking Mrs. Clinton’s emails, Mr. Trump, seemingly out of the blue, fired him for the very thing that had earned him high praise.

The questions were immediate and the skeptics ran riot with speculation. What, exactly, did Mr. Trump seemingly have to hide?

President Nixon is infamous for his decision to authorize a break-in of Democratic National Committee headquarters at the Watergate complex in 1972 and then for conspiring to cover up the details.

He, too, ordered the firing of the man leading the investigation–special prosecutor Archibald Cox. When his attorney general and deputy attorney general resigned rather than carry out the order, the event became known as the “Saturday Night Massacre.”

Mr. Nixon’s firing of Mr. Cox  was the decision that would “eventually bring Nixon down,” according to The New York Times.

This is not the first time that people have drawn similarities between Mr. Trump’s presidency and the Watergate scandal and, at this rate, the comparisons will no doubt continue. Republican Sen. John McCain of Arizona has already said things are developing to Watergate size and scale. (Mr. McCain later tried to walk back and soften his comments.)

The scandal that Mr. Nixon created is remembered as the worst in American history, and Mr. Nixon was forced to resign in August of 1974.

The American people have had a high level of mistrust and skepticism when it comes to their government in the nearly half century since. If the president is viewed as dishonest, then America cannot function as it should.

Mr. Nixon’s fate is considered a great American tragedy and a cautionary tale. The leader lied to his people and a country cannot easily recover from that.

The potential connection between Mr. Trump and Mr. Nixon goes far beyond unflattering comparisons, however. Americans now fear that they may be watching history repeat itself.

The investigation of Mr. Trump’s staff is now in the hands of another special counsel, former FBI Director Robert Mueller, who will determine whether members of that staff colluded with a foreign power–Russia–to manipulate last year’s election.

Free and open elections are a primary reason that America is considered a shining beacon of democracy. When elections are potentially tainted and jeopardized, it is a long road back to trust.

Comparisons to Mr. Nixon and anything associated with the Watergate scandal are concerning, even scary.

History should not repeat itself. In this instance, America simply cannot afford for it to happen.