We care way too much about where we go to college 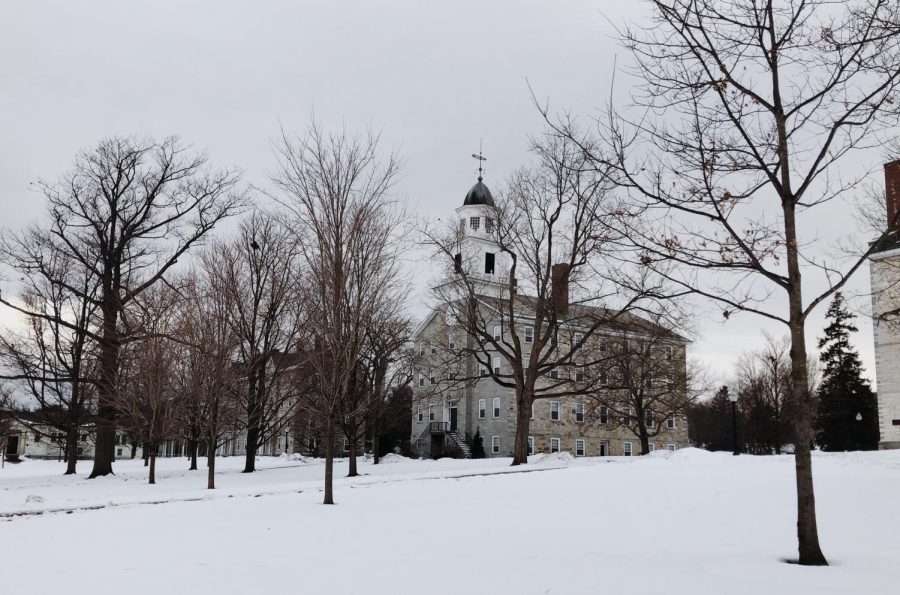 Middlebury College in Vermont is among the author's college choices.

It’s often the first question high school seniors are faced with when they meet someone for the first time:

“So where are you going to college?”

Besides the fact that the question gets old, there is a bigger problem —  the way people react when we name a school that isn’t a top-ranked university.

I recently mentioned this phenomenon to a couple of friends during a study hall. Just about every senior had a story to tell.

“I went to this Boston Scientific [program] and all the kids were listing off what schools they’re applying to, and they all had Ivies,” Megha Varghese said. “I just pretended I had them on my list. I started with UMass and all their faces just dropped.”

Added Rachel Wang: “It’s just because people just associate the brand of their school with their worth as a student and as a person.”

Anyone who goes to AMSA knows it provides an excellent academic environment. The student body is composed of brilliant academics with astonishing talent. Having lots of successful students in a classroom is always going to produce a certain amount of competition, and it comes with a price: We care way too much about the name of our college of choice.

“It’s a school that has gathered people with competitive and judgmental traits together and brewed a toxic environment,’ Aarthi Gopalan said. “And it’s a chain reaction because we learn from previous grades and each other.”

The success of AMSA students, while admirable, makes some students feel the pressure even more. It seems that when everyone is able to attain that 4.0 GPA, every student feels more pressured to compete to achieve it.

“It’s especially bad at AMSA because we have so many students who can get into great schools, as well as outside pressure,” senior Emma Donohue said.

Kate Driver, head of guidance, believes that the college stigma at AMSA is largely a result of our society’s view of higher education.

“I think a lot of it comes from the general culture, including the media, such as TV shows and the news, but some of it definitely comes from parents and students,” she said. “Not to lay blame on any particular group, but our entire culture is a little bit obsessed with private colleges.”

In response to hearing some of the negativity regarding college, Ms. Driver recommended Frank Bruni’s book, Where You’ll Go is Not Who You’ll Be, which covers where the leaders of the country went to school. Mr. Bruni is an op-ed columnist for The New York Times.

“We spend so much time and effort during the process, and in reality, the part that matters is what you do when you get there. It’s like couples that spend so much time planning their wedding and forget about the marriage,” she said.

In addition, it’s no secret that college is expensive. Many students have trouble choosing a college in the first place, but it becomes even more difficult when they worry about judgment from other students because of where they go.

“People are afraid of making choices that are best for them because of how others perceive them,” Aarthi said.

“It also depends culturally. As an Indian dude I feel like I’m expected to go to the best school I can,” Alex said. “At the same time, I have to consider the price of the four years of grad school to become a doctor, too.”

Ms. Driver shared that guidance is working on encouraging students to choose colleges that are the “right fit” both financially and academically, instead of focusing on just the name brand.

“Some kids come into the process looking […] at Naviance data thinking that a low admit rate means the school is good,” she said. “As counselors, we are trying to talk more about options that might not be as well known, but great fits for students that they can [afford].”

For some students, the fear of choosing a lesser-name school is amplified by the spring community meeting, where the college, university, or future plans of each student are announced in front of stakeholders.

“I think the intentions are to congratulate the efforts we put in, but it’s counterintuitive because the crowd’s reaction ruins it,” Aarthi said. “Having it live gives people time to react.”

Ms. Driver sees the assembly as a time for students to be proud of their choices.

“I almost think that it’s an opportunity where we have to be brave,” she said. “The more students act proud of their choices, the better the culture will get.”

While the assemblies are very positive, the crowd always has a habit of clapping and cheering much louder for more prestigious schools. For state schools and gap years, there is a less enthusiastic response.

“If I get into my top school I almost want to say yes to it just for that moment. It’s always in the back of your head,” Megha said.

Added Alex: “It can also be [difficult because] not everyone chooses to go to college. [Also], some people are going to certain schools for financial reasons and might feel less proud of their choice.”

All the students I talked with seemed to agree that recognizing seniors’ accomplishments is important, but that announcing them at an assembly without context creates certain amounts of anxiety.

“I was sitting next to younger kids last year who made remarks about students who didn’t choose Ivy Leagues and top schools because they don’t really understand the process,” Rachel said. “As if you don’t end up at a certain school, you’re not good.”

The worst part is that students are in agreement that the problem exists, but it doesn’t seem to go away.

“I don’t even get how we got here,” Emma said. “I guess because we are made to be competitive because the first thing we do is take a math placement test and you are stuck with that group of people as your friends.”

In March, when a majority of schools release admission decisions, things only seem to get worse.

Many seniors dread the days that popular schools release decisions, and the chatter among the grade is comprised almost entirely of things like something I heard in the cafeteria the other day:

“I only got rejected because [insert a student’s name] took my spot at Northeastern!”

“Everyone is involved in everyone else’s processes and it shouldn’t be that way,” Samantha Jondro said. “During the whole process, everyone was sort of competing to see who would do different [things] first, or who got in [where].”

As a senior I admit that it’s not always easy watching my friends succeed when it means that they got into a school that I didn’t, but as I move forward in the college process, I’ve learned a lot about what really matters in choosing the school that’s right for me — and it’s not the name of the institution.